So, Love and Hip Hop Atlanta’s season finale aired last night and HUNNY, I’m here to walk you through it. 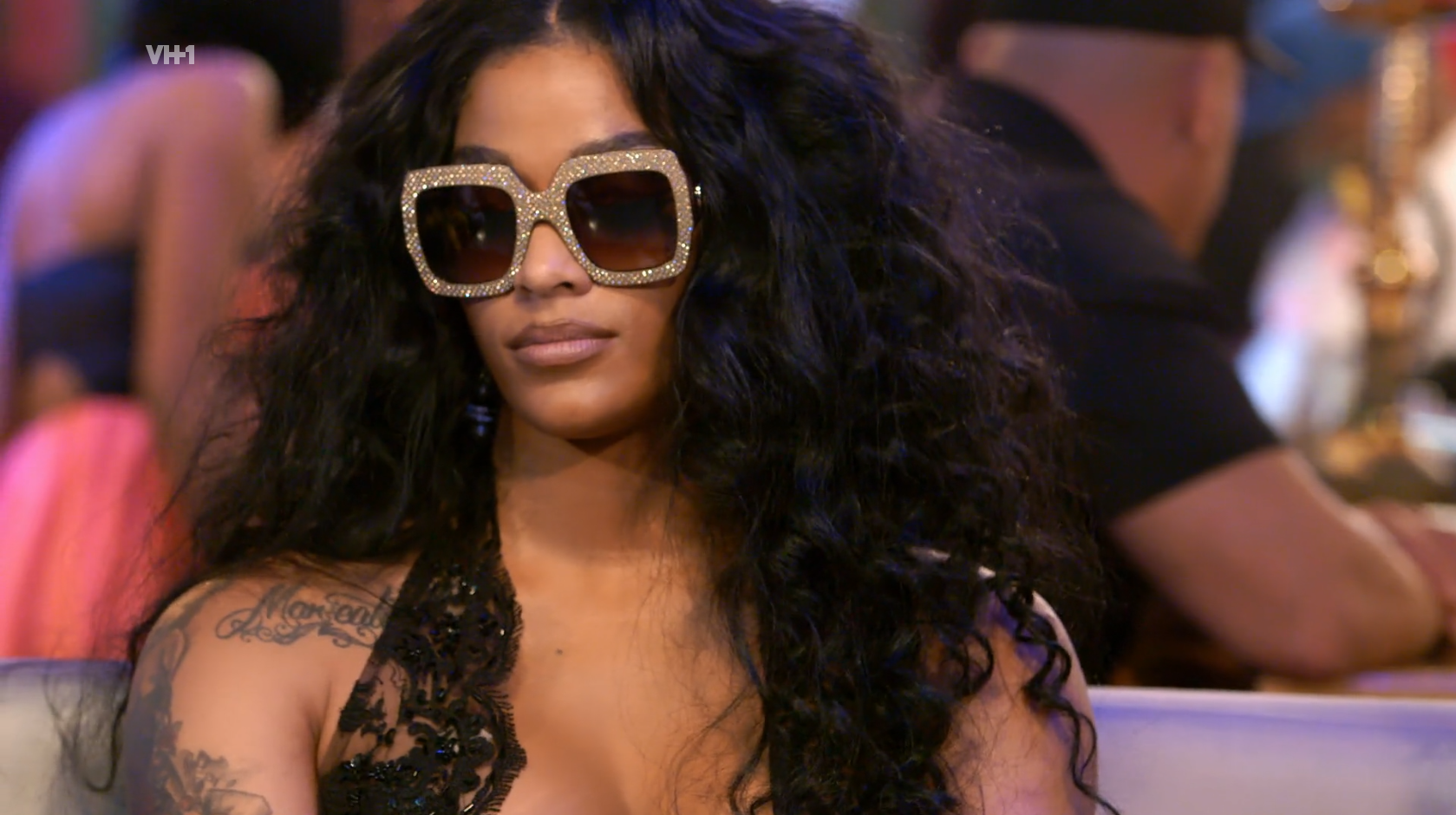 To start, Ariane is becoming more serious about her singing career by the day. So much so, she invites K. Michelle, her latest inspiration, to her listening party. While K. Michelle said she couldn’t make it because she was booked, she took no time to throw shade at her latest shadow, (Ariane is following her around on tour). I mean, she did only have 1 and a half songs to play at the listening party – but that’s not the point! K. Michelle is a terrible friend with her messy ass.

Kelsie, Kirk’s daughter, hasn’t been taking constructive criticism about her singing career, or lack thereof, well. Not quite sure who got through to her because Kirk and Rasheeda sure couldn’t as it pertained to her performance skills on stage or as an employee at Pressed. A store of which she is employed only by the graces of the owner, that being her step mom Rasheeda. Fast forward to last night, she has the courage to perform at a family housewarming. It was an outside performance and it actually wasn’t that bad! Rasheeda also mentions Kelsie’s performance at work has improved. Anything to get signed to mommy and daddy’s label, right?!

Shirleen and Ernest get on my nerves. As if the both of them are too naive to know that Momma Dee would never approve of their private meetings, despite how innocent they may seem. Ernest’s excuse is he doesn’t have any friends. Old man, go make some. Your wife is a retired pimp and felon with anger issues. *ehem* Nonetheless, Shirleen sets up this meeting with Ernest at the park..she also invites Momma Dee and somehow Lil Scrappy ends up there too. Just straight awkward. Momma Dee takes this opportunity to tell Ernest that he is only entitled to $1 if she were to be “left for dead”. He read the Will out loud and yea, it was awkward. Like an episode of Unsung type of awkward.

Joseline, has never had all of her marbles to begin with, but she’s unlocked a new level of delusion. She still clings to the false rumor of her and Stevie being married. She also still blatantly feels no remorse for ruining financial relations and set protocols with Mimi, his child’s mother. Disrupting someone’s stream of income out of petty ass anger is some serious shit. Especially if y’all ain’t even married, for real. Also, she also is way too quick to call the man she “loves” a bitch. The bottom line is: Stevie is over her ass and she doesn’t know how to handle it.

Momma Dee is working on a new single. The shit is hilarious and not worth discussion, lol. But, I’m glad she can pay the bills with her shenanigans, instead of pimping hoes in the streets. Nothing like a clean hustle. But she is talking about laying her edges down in this new shit she has coming out – and in that order.🙄

Tiara and KK were able to get along for the sake of Scrap’s baby’s birthday. One thing though, Tiara invited J-Nicks, this guy she’s been talking to lately. KK was not here for it. She starts by explaining how Nicks and Scrap were cool and it’s just not a good look. Then she said he looked nerdy 🤓🤓. Whatever the hell she said though, he couldn’t get a word out before she asked his ass to leave. Respectful dude. He didn’t want any problems from Miss. America’s Most Wanted herself. I can’t say I blame him either, shit.

Lil Scrappy proposes to Bambi, finally. Her parents were there, Momma Dee was there (with her approval), and Tammy of course. Despite how much of a dog I know Scrappy is, there’s something tear jerking about a proposal..always. 💍

My girl Tommie. I swear I keep her in my prayers because she……..is going through some thangs. She finally gets to counseling – she knows she’s hooked on the bottle, but still has an issue admitting it at times. She opens up about her father and where her terrible temperament stems from..him. She explains how hard it was seeing him in jail all throughout her childhood. He served 17 years and was released only to be shot a year later. She opens up about her having been in group shelters and foster homes and how she had her 1st baby in the County Jail. Tommie can admit to wanting to drink less because she says her life is destined for greater things. She was recently manhandled by a police officer. Take a look at this👇🏽:

Ok, so here we are at Ariane’s listening party. (We already know she bit that fucked up bait 🎣 that K. Michelle fed her ass – so Joseline is coming.) Here’s a list of the folks who came and actually heard Ariane’s music:

🐸☕️..Joseline and Dawn show up all late and completely miss the listening part of the party – we know why they came. The 2 come to sit in the same space with the rest of their cast mates, and CHILE things get heated. D. Smith already knows what it is so she takes the opportunity to exit and she drags her friend Betty Idol out of the mess with her. Can’t blame her. Ariane sits next to Joseline. Keeping an extra person in between Mimi and Joseline wouldn’t hurt, right? Doesn’t matter. Joseline asked her to move because she said she needed some ‘space’. You could hear a damn pin drop. Dawn, head of the #ShadyLadies, starts off the conversation by saying,

..it only took a half a second for Miss. Hernanadez to throw not 1, not 2, but 3 whole damn drinks on Mimi, who was seated about 2 yards away from her. CHILE, Joseline was screaming to the top of her lungs and was allllll the way out of breath telling Mimi about her so-called ‘husband’. The Puerto Rican Princess was furious. Her reasons for conflict between cast-mates usually don’t make any sense, but at least we can usually keep up with why. Ariane was torn to pieces, as she should’ve been, for putting her best friend Mimi in that crazy ass situation. Ariane should have known better. Evvvvvvvvverybody knows Joseline ain’t got no damn damn marbles.

End of the episode synopsis. (The part where each character makes a dramatic exit from the season, you know, proving their importance to us by bragging about what they actually do for a living.) Tell me how many different facial expressions you make while you read this bullshit 😂 LOL.

Karlie Redd: She says she is done with Lyfe Jennings but she is not giving up on love. “I’m married to my career & my coins,” she says.

Tammy Flocka: Is moving out with her gorgeous 11 year old daughter, Charlie, to get some space from ol’ cheating ass Waka.

Mimi Faust: Is proud Joseline is out of her life for good now that the air is clear about their fake marriage. Not that Joseline was ever a good step-mom, but I can feel her pain. Mimi goes on to explain her new career path and fascination with interior design.

K. Michelle: Is in her own little cocky ass world. Shit, ain’t nothing wrong with that sometimes. She enjoys spending quality time with herself, entertaining and touring the world all while promoting Jack Daniels. She’s,

“..not worried about these little girls around Atlanta because they don’t pay her bills.”

..I can certainly amen with her on that one.

Momma Dee: Her and Ernest are still working it out despite his entitlement to only $1 in the event of her passing. She’s doing her own thing with her career and she’s finally in order with approval of her son’s happiness and love life.

KK: Her & her dog have been randomly charged for some theft. Despite her legal battles, she says she’s keeping an eye on Tommie and that damn bottle.

Joseline Hernandez: Is still getting back at Steebie via working with Young Dro in the studio. She says,

“All I wanna do is manage my own career.”

..girl, we all know you’re locked into that lifetime contract with Stevie *ehem* NEXT.

Stevie J: Mister playa playa himself is coming out with a sparkling wine, (MORENO), and is focused on his music, kids, and did anybody else see Deelishis allllll up in more than one scene?! What’s up with that? Ain’t no telling who his new boo is, but his ass is moving right along without Joseline…as he should.

How many different facial expressions did you make while reading this shit here? 🐸☕️😭⇣ COMMENT ⇣

Looking to be healthier? Looking for opportunities to become an entrepreneur? Maybe event combine them? Well http://EarlDorsey.com provides you with healthier options to live a better life & opens doors so you can take control of your own life!! Click on the site now & take a look!! It could change your life!!!